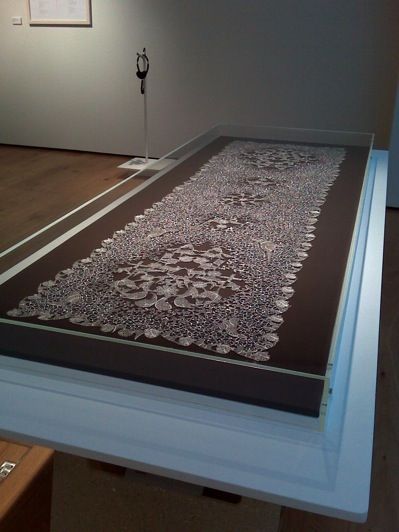 Mantilla’ takes its name from the traditional Spanish lace headscarf worn at weddings and funerals, and is often bequeathed through families. Respecting the importance of traditional techniques, the silver filligree in ‘Mantilla’ is made by Spanish craftsmen. Across Mantilla, Lebrusan replaces the traditional decorative motifs and asserts her own narratives and patterns: hunting scenes, a chair, a cross. Interweaving her Spanish heritage, Catholic upbringing and family, the first motif recalls Lebrusan’s grandfather, the second her grandmother and the third, an absent friend.

Memory – individual or collective – is one of the fundamental pillars of Lebrusan’s practice. It allows her to dig deeply into how she experiences life, her environment, the objects and people she engages with. Weaving different times that connect personal truths, Mantilla encourages viewers to tap into their reservoir of memory and draw links between the past, present and future.

The veil – if reified in feminist discourse and art – has certainly been overused in the West to communicate patriarchy and male supremacy. Lebrusan knowingly adopts a sign of cross-cultural mistranslation in the territory of the woman’s visibility, only to unpack and resist them. Literally and figuratively altering the veil from within, Lebrusan confront master narratives of the veil and accentuates a woman’s individuality, as opposed to collective identity. By extension, ‘Mantilla’ also presents the diversity of women and veil as a headscarf.

READ THE TEXT WRITEN BY SAM CORNISH ABOUT THIS WORK HERE