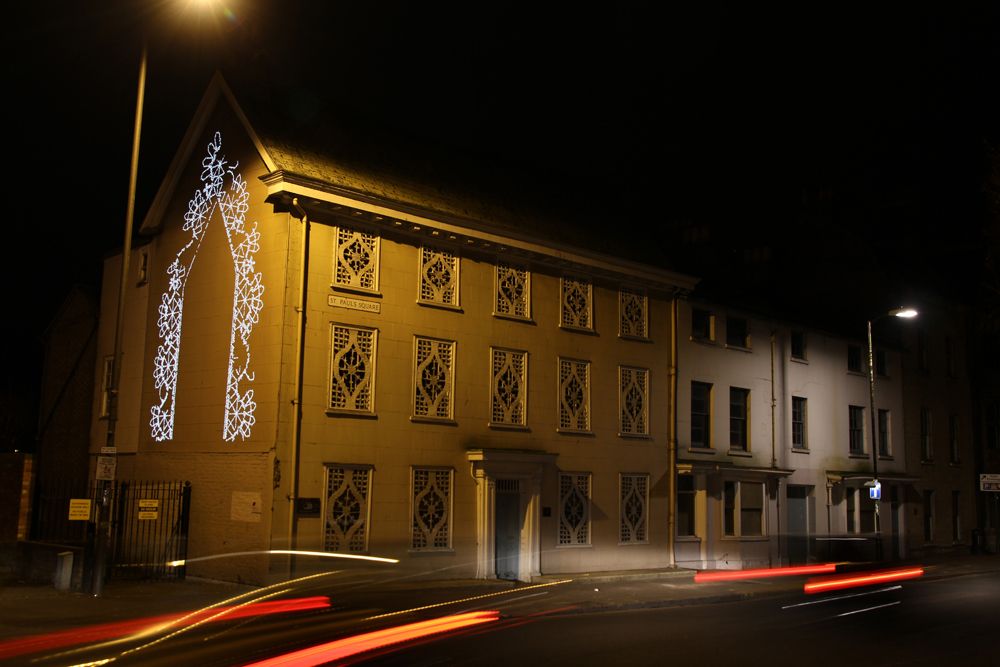 Laced Words elegantly laced the side of a derelict with light and sound. The work celebrates the craftsmanship of lacemakers and site history in Bedfordshire.

Lebrusan collaborated with audio-visual artist Kathy Hinde to create a repetitive pattern of words made out of light. The rhythm for the words gradually unfold following the lace’s pattern and texture. Some words are clear while others blend into the intricate motif of the lace. Simultaneously, audiences were provided wireless headphones that presented a soundscape for lacemaking. The audio revealed Sandra (an expert lace maker explaining her actions as she makes) speaking alongside sounds from lace making — the clicking of bobbins and pins being placed into the cushion. Some words remain intelligible while some naturally fuse into the rhythmic sonic texture.

Laced Words decoratively envelops the dilapidated wall with sentimentality, augmenting the historic character of Bedfordshire. It invites viewers to ponder about what lies within and what happens next for the derelict building, as well as the overlooked lace heritage of Bedfordshire. Laced Words not only returns the memories of the town’s lace to the audience, it also encourages the retrieval of personal stories around lace in the viewers’ own memory.

Laced Words premiered on 22 February 2014 on the opening night of Alamanac Festival by Bedford Creative Arts.