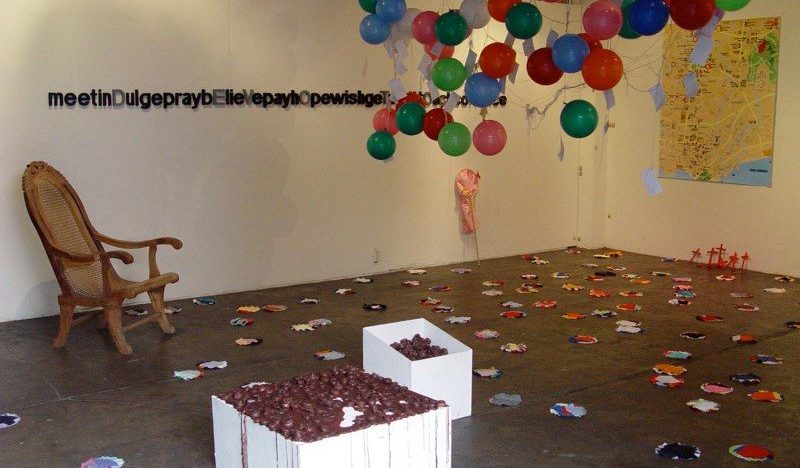 Medium: Environmental work. Creation of an environment in the gallery space with results extracted from performances and actions made in different churches in Cebu city.

El rosario de la abuela (Grandmother’s rosary) is a room of Filipino culture and devotion made from performances, actions and materials observed and gathered from different churches in Cebu City. This project was conceived and developed in collaboration with Colombian artist Olga Parra Benavides who has resided in the Philippines for years. The two artists’ conceptual thinking and similar approaches to art prompted their collaboration around the theme of religion and belief in the public space.

Lebrusan and Benavides observed Filipino elements of popular devotion to explore collective memory as the origin of culture and identity. They visited churches across the city, observed the varied Catholic structures and later created ephemeral actions in them – for example, balloons filled with helium with wishes attached to them by a long cord – Results of the actions were re-adapted into the gallery space as a ‘cultural warehouse’ that was open to the public.

Some of the objects found in the gallery space were: balloons from Guadalupe church, candles from Santo Niño and cards with written prayers of women from a mass production factory. Each of these objects was a response to the cultural performances and daily actions that occurred in the city. By displacing the objects in Luna Art Collective Gallery, El rosario de la abuela invited visitors to associate the objects’ materialities with their social meaning. This decontextualisation – similar to musealisation – encouraged audiences to reflect on their personal narratives and beliefs separated from and alongside, common history and memory.